This well camouflaged worm will nom all your plants to death.

This vile little creature can destroy your plant in one or two days! It may have had an accomplice, but I never saw a side kick. 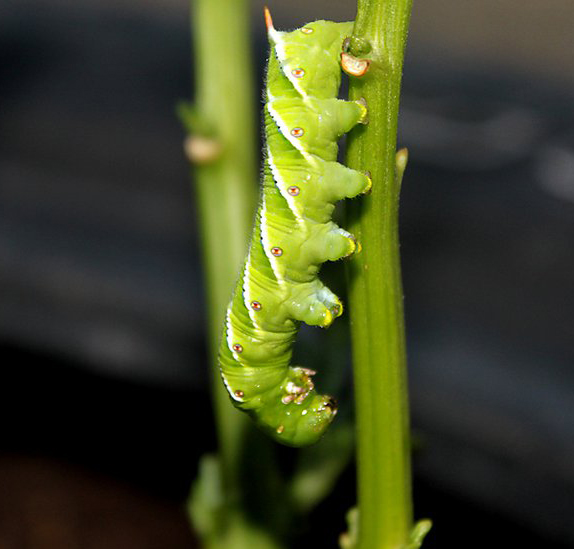 The victim: my poor pepper plant. I had two red bell pepper plants growing. These two plants were my first true experiment growing food in the desert. I kept them outside because I figured peppers loved the heat. I watered and check on them every day. I saw 3 peppers starting, I was so excited to see them.

One day, I went out to check on them, and half of the leaves were gone! I searched the plant and figured that maybe birds had eaten the leaves as I saw no pesky, leaf munching critters.

The next day, my plant had only a few leaves left, and the other plant was missing leaves too! It wasn't until there were too few leaves to hide it, that I saw this critter. It was the same color as the plant and hard to see. I poked it with a stick.

It's a very slow creature, and it looked so neat that I used a stick to pick it up and place it on a flower for a picture. Shortly, after I backed away from the Oleander flowers that I placed it on, a bird flew in and nabbed the worm! I guess that's why it's colored the same green as the leaves it hides in. It must be tasty. 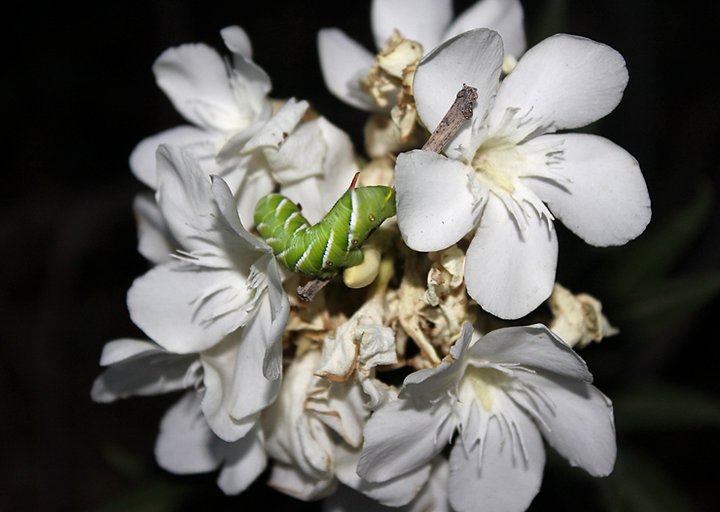 My pepper plants didn't survive. With so many leaves eaten so quickly, they just couldn't obtain enough sunlight to repair themselves. No photosynthesis for you!

I was called this 'bug' a catepillar for awhile. I posted the photos of it on Facebook and was quickly corrected that this was the dreaded Horned Tomato worm, killer plants, destoyer of nations, stomper of hearts. I know to look for you now, you little heathen!

I planted some broccoli seeds in March. Because of the shade from the nearby palm tree, the sprouts lasted through the harsh desert summer.

They became viney, growing long and spreading through the shady area. I'm sure they were just struggling to stay alive. I know that it's a cool weather plant so I didn't expect much out of it until fall.

As soon as the temperatures weaned off, the broccoli began shooting off those edible florets. They were pretty spindley.

As any desert dweller knows, the fall season is very short. Only a few weeks passed before my garden was at risk of freezing temperatures. I picked the florets and ate them...delicious of course.

After the 4 days of freezing temps, the bush began growing again. It was a bush at this point. It flowered immensely. Without doing proper research and lacking time, I just let it go.

The yellow flowers were so abundant that the bees seemed to be drunk with excitement. I now know to cut these before this occurs. This was still exciting, and it's still alive!