My Success with Basil in the Desert

I bought a few Basil plants from a grocery store. Who doesn't want fresh Basil when you're making your own pizza at home? I also thought that if I could grow enough of it, I could dry it and replace my dried, ground Basil that I love to use in other recipes.

I kept the plants inside because it was summer, which in the desert means a dry, humidless 100°F or more. I thought it would die in a day if I shoved it outside. Within a week it turned black, shriveled and died. I thought it was diseased. I've never seen a plant turn black like that. I figured I bought a bad one. So, I bought another and the same thing happened.

My third purchase was in frustration and eventually I put it outside, gave it a lot of water, and hoped for the best. It looked better the next day. So, I figured it just needed fresh air and more sun. Maybe there was something off in my house. I just bought the house after all. After a week, there were new leaves growing. After two weeks, it doubled in size. By the end of summer, I had a Basil bush!

Now, I must add, I kept the Basil against the back of my house. My house faces South East. The sun crosses diagonally over the house from the front and set in the back. This Basil absorbed the afternoon/evening sun from about 12:30pm - around 6pm when the sun fell behind the mountain.

Because of my experience with losing a few of the Basil plants before I realized what Basil needed, I was hesitant to pick from the plant. I now know that I should have been doing that all along. I also let it seed, which I shouldn't have done if I wanted it to keep producing leaves.

Eventually, summer was over and I was at least satisfied with the results. I cut all of the stalks that had leaves on them worth keeping and soaked them in a sink full of water. I rinsed all of the leaves and did a little scrubbing with my fingers then laid them down on paper towels to dry. Patting them a little bit with paper towel helps. Avoid leaving them on the paper wet paper towels as that will keep them damp longer. 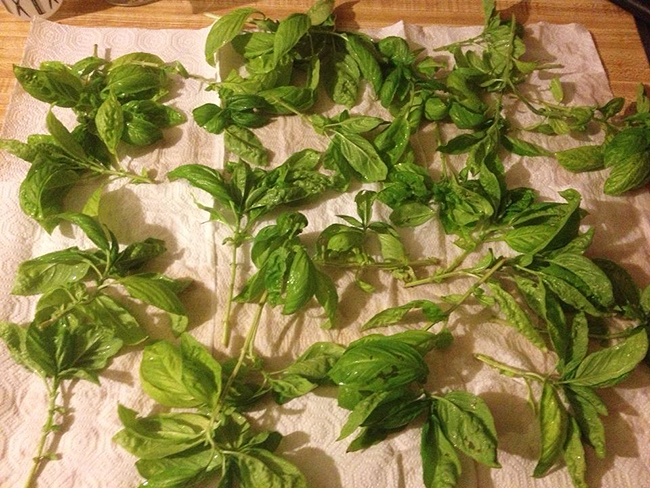 I wrapped the stems with string, tied a knot and tied the string to a pegged shelf to dry. I ended up with four bundles. It took about 3 weeks. When I was done, my kitchen smelled amazing! I imagined I was walking into an apothecary shop or a spice store.

This part is fun, but only if you have a mortar and pestle. I bought mine at Bed,Bath & Beyond (surprisingly) with one of those $5 or $10 off $30 coupons. I think it was only $28 and it was easy to find something else I wanted in the store. $20 something is the best you're going to get on a mortar and pestle over 4 wide. I searched for weeks online and in stores. 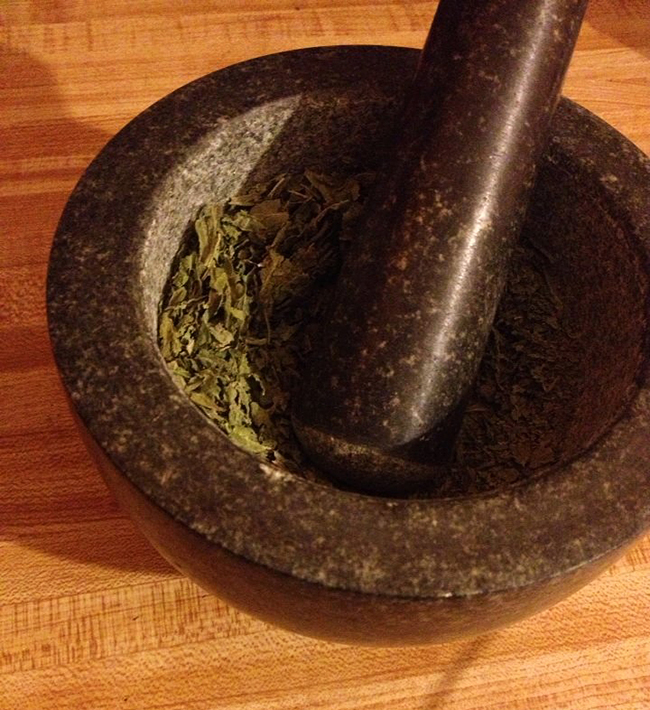 I picked off the leaves and threw the stems away. I ground until a few were so small that they would turn to power if I kept grinding. So, I took the bowl in both hands and quickly spun it back and forth bringing the large pieces (that still were just too large) to the top so I could scoop them out with a spooon. I set the big pieces aside and poured the rest onto a piece of paper. I could them fold this paper and pour the ground herbs into a spice shaker and continued on with the grinding process. Again my kitchen smelled amazing when I was done.

Having freshly ground herbs makes such a big difference. I'd buy the typical preground shakers in the store, but you have no idea how long they've already been sitting on the shelf at the store, let alone how long you had them on your own shelf at home. I can taste and smell the difference. You don't need to use as much to get the same affect. Although these ground herbs do go a long way, even if you use them frequently and generously. The Basil I dried and ground last year is still pretty fresh and the shaker is still half full.

Where I've used this Basil

I'd use pita bread as a crust and make a mini pizza. I've done this many times and during these experiments I learned that putting chunky slices of carrot on the pizza is great for creating a topping that has a crunch. It's hard to get the crust crispy and crunchy without burning it or drying it out. Of course, I sprinkle a heavy amount of Basil on top before I put it in the oven.

I love to spice up a spaghetti sauce. Store bought sauces are either too water or too salty. So, to fix this, I'll break down some fresh tomato in a skillet with onion, red pepper, a bit of frozen spinach and Basil, then use half of the sauce from the jar.

Sometimes those premade pizzas at the grocery store go on clearance. That night it will go in the oven, but not without a few extra toppings. They tend to be pretty bland. So, I love to add basil and mushroom or artichoke.